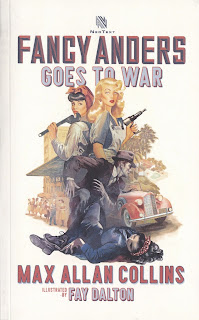 In 1942 Los Angeles, a young socialite named Fancy Anders finds herself in charge of her father’s famous detective agency when he is called back to active duty. She is only supposed to be a caretaker of the agency, routing incoming cases to other agencies. But when a young female worker named Rose at Amalgamated Aircraft, who had been chosen to pose as a model for a new line of patriotic posters is found dead, Fancy’s suspicions are aroused. Was it an accidental death or was she murdered? Fancy goes undercover at the factory, working as a riveter alongside a diverse group of other women, to get to the bottom of it. But as the story moves along, Fancy (and we readers) soon come to realize there is far more going on here than a simple murder mystery, likely with massive consequences.

Fancy Anders is a great new character and building her into this novella form is a real treat. It’s a tight, lean story and serves well to not only set up Fancy as a well-rounded character but also provides an interesting detective yarn in a cool historical setting. As always, Collins’ proves adept at interweaving a good plot with historical figures including, in this case, no less than FDR.

This is the first novella of three (so far) to feature the adventurous tomboy. She has classical Hollywood beauty mixed with a keen intelligence and over-the-top confidence. Sort of a combination of Phryne Fisher and Nancy Drew. Comparisons to Brenda Starr and Max Allan Collins’ own Ms. Tree would not be out of line. But she is also smart enough to know she doesn’t have the street savvy to go it alone so makes good use of friends and confidants, including LA homicide cop, Rick Hinder. She’s no wallflower to be sure, having lived an adventurous life already.

The novella reads like a prose version of a graphic novel and indeed, there is a wonderful illustration at the beginning of each chapter by artist/illustrator Fay Dalton, known for her James Bond folio work and Titan’s Hard Case Crime graphic novels. The entire package is a wonderful combination of retro noir art in all its forms.