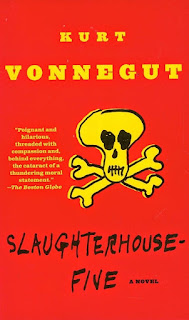 I’m not sure I am qualified to write a review for this novel. It’s been the subject of so many analyses and interpretation by the literati crowd and professorial reviewers that my comments will surely pale by comparison.  So rather than compete with some kind of attempt to impress with how it "affected me" I will simplify my analysis:

I have friends that absolutely loved it and friends that feel charitable when giving it only one star.  I can understand both points of view.  I think if I had read this in high school when many were forced to read and write a book report on it, then I would come close to hating it.  But at this point in my life and looking back at a 20+year career in the US Air Force I can appreciate its approach and style much better.   Especially the way the drama of the very real and horrific bombing of Dresden at the end of WWII is told in a semi-biographical way in a nonlinear order with events becoming clear through flashbacks (or time travel experiences) from the narrator who describes the stories of Billy Pilgrim, who in turn believes himself to have been in an alien zoo and to have experienced time travel.

Boy, what a mishmash of a description.  Sorry about that but...so it goes.

Categorizing this novel is something else altogether.  I guess it’s science fiction and I guess it’s anti-war, and I know it’s a prime example of the literary device known as an “unreliable narrator”.  I also know that several of the other characters in this novel also appear in Vonnegut’s other novels but not always as quite the same character as they are here.

It sounds like a convoluted structure for a novel, especially with all the jumping around in time but I actually followed it pretty easily.  I’m glad to have finally read it, not only because I’ve always felt I “should” read at least one Vonnegut novel but also because reading it really got me to think.  I also understand it has been one of the most banned books in the US ever since publication and that always draws me to such a novel.

Not my usual cup-of-tea but I'm very glad to have read it.