Jewel of the Java Sea by Dan Cushman 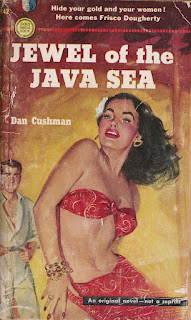 Frisco Dougherty has been hanging around the islands of the South China Sea, from Singapore to Manilla and to the coast of India ever since the war ended. He’s been hunting for over fifteen years, hunting diamonds, hoping to gain his fortune and enough dough to get him back home to San Francisco. And now he’s found one. A diamond that’s been oddly cut, not so large as he’d hoped but certainly of superior quality. And even better, it appears to be just the start of a group of diamonds, all available for a man filled with enough cunning and bravado to acquire them one way or another.

This is a classic 1950’s-era South Pacific adventure novel. The plot is filled with rogues and villains out to steal that which Frisco has legitimately stolen first. Frisco has allies but he’s never certain he can entirely trust them. Among them is a beautiful native girl named Anna as well as a Cockney named Jaske, a Chinese merchant, and an American going by the name Deering. From some he can gain clues to how to acquire the rest of the diamonds and from others he can make deals to his own advantage. But just who will help and who will hinder remains an open-ended question.

Author Dan Cushman has written a number of novels that take place in the South Pacific as well as the Congo and the Yukon, all based on his own adventurous life and experiences. Later he turned his hand to writing western/historical novels featuring Native Americans and Montana history. He is probably best known for his novel, “Stay Away, Joe” which was turned into a film starring Elvis Presley.

I was surprised at how much I enjoyed this book. I was in the mood for a good rollicking adventure yarn and this one fit the bill nicely. I managed to learn a little more about the regions where the story takes place as well as some nice details about the provenance of some famous diamonds that found their way through this area. But at its heart, this is a solid novel of back-stabbing, conniving adventurers intent on gaining riches the old-fashioned way. Trading, dealing, stealing, and murdering, all on the way to a satisfying ending.